The Geopier Impact system is extremely effective for loose sands and semi-cohesive soils — and when caving soils are expected. It is used as a cost-effective alternative to overexcavation and replacement deep foundations (piles, caissons). It also puts you right back to spread footings and floor slabs-on-grade, right where you want to be. 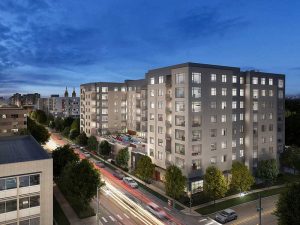 Modera Cap Hill is an 8-story luxury residential development in Denver's Capitol Hill neighborhood.  The building has a steel stud bearing wall system over a two-level concrete podium and two levels of underground parking.  The column loads were over 1,000 kips and core mat footings were loaded up to 3,000 kips.

The subsurface conditions below the foundation level generally consist of about 20 to 35 feet of medium dense sand underlain by medium stiff to very stiff silt and clay overlying claystone bedrock.  Groundwater was generally encountered approximately 14 to 20 feet below lowest level slab elevation.  The total thicknesses of the compressible soil layers were highly variable across the footprint of the structure which resulted in ground improvement design challenges requiring a carefully crafted plan.

The Geopier Impact® System was chosen for foundation support of this structure as an alternative to a significantly more costly drilled pier deep foundation approach.  The Impact system was designed to reinforce the variable thickness sand over clay soil profile for support of the structural building loads and allowed a high allowable foundation bearing pressure of 8,000 psf.

In addition to a thorough Quality Control program implemented throughout construction, modulus load testing was completed to verify the design stiffness of the Geopier ground improvement.  The testing revealed less than ½-inch deflection throughout the test loading which extended up to a concentrated stress of 45,000 psf. 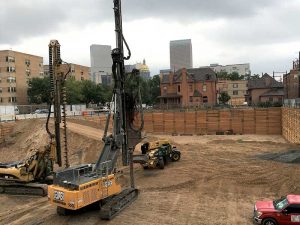 The development is located within a lateral distance of less than 40 feet to several existing timber and masonry structures including a building registered as a National Historic Landmark.  Due to the sensitivity of the adjacent structures, vibration monitoring was completed both within the excavation level as well as at street level to evaluate vibration levels during Impact installations.

At both monitoring locations, maximum peak velocities did not exceed 0.9 in/sec at distances as close as 10 feet from the energy source (Geopier tamper).  Peak velocities were less than 0.5 in/sec within distances of 30 feet from the source.  For reference to these measurements, high frequency vibration levels of less than 2 in/sec at the location of an existing structure are generally considered to be acceptable.  These levels of vibrations are unlikely to lead to building damage.  Vibration levels between 0.5 in/sec and 2 in/sec, are generally considered to be an annoyance but not structurally damaging.  Vibration levels of less than 0.5 in/sec are often not noticeable.